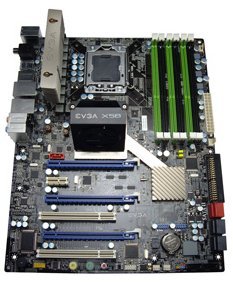 This week marks the introduction of several of the most anticipated motherboards for the upcoming Intel Core i7.  Today, EVGA has provided information on their new X58 SLI FTW motherboard.

The motherboard is, of course, based on the Intel(R) X58 Express chipset for the Intel(R) Core(TM) i7 processors. The EVGA X58 SLI FTW motherboard features 6 DIMM slots for triple-channel DDR3 RAM, 2-way and 3-way SLI support, enhanced VDroop control, and the EVGA E-LEET Tuning Utility for easy, yet powerful overclocking.  The motherboard will be released next month alongside Intel’s next generation platform.