The degree to which math calculators and math apps have advanced is rather impressive. There are some that can handle very complex problems in a way that computers could not have done just 30 years ago. All the apps in this article are free for the most part, and all of them are built for the Android operating system. 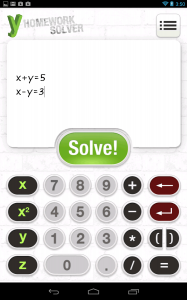 This is the perfect app for practicing and perfecting your algebra. If you are not sure what to do next, then it gives you hints too, as opposed to just giving you the answer. The only downside is that it runs a credits system, which means very active users may have to pay.

Most students find it perfect for their needs, and it is one of the easiest math apps to use on Google Play. It covers single unknown equation, simplification, 2 equation sets and quadratic equations. 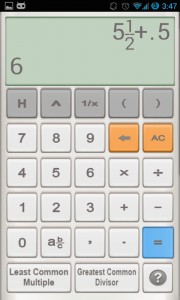 For the most part this app is free, but it does have non-intrusive adverts on it. It acts like a regular calculator, but you can input a massive range of fractions and have it work out the answer for you.

The only annoying aspect is the “add rating” function that it forces you to go through. The amount of mathematical functions it can take you through with regards to fractions is rather large, so do not be fooled by the seemingly simple interface and basic design. Its core mechanic and programming will help you get through your fractions work with ease. 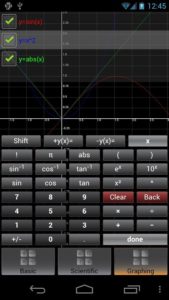 You can see how the designers have tried hard to make this simple design a little more stylish. Do not be put off by the interface as it will not take you long to figure it out. It works well for both High School and college work. 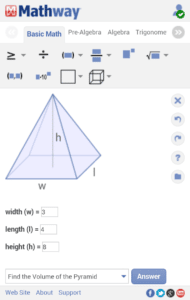 This app covers a wide range of mathematical concepts and calculations. It has a very easy-to-use and simple interface that may even appeal to those that are uneasy when it comes to math. Fun math apps are hard to find, but this one may qualify because it is just so easy to use and clear. The interface is reminiscent of High School textbooks.

The only downside is that it is more like a calculator than any other app in this article. It only deals in answers. If you are looking to process information or learn through doing, then this is not a terrible app to use, but it will only show you answers. If you are working out math problems and want to check your work, then this is the app for you. It is also the app for you if you have math homework and want to cheat.

It seems unfair to have two fraction calculators in one article, but this is the most popular of the two. It is actually slightly inferior to the other math calculator on this app, but it is more popular because it has a more aesthetically pleasing interface.

This app allows you to work a massive range of fraction calculations. Many people say it comes close to being fun. It is certainly very useful and easy to use. There are no real complaints about this app that hold any water. Some think it should be more kid-friendly, but it wasn’t built for kids. Some even think it should be taken off of Google Play because they want to keep it for themselves.

This app has the most intuitive interface mainly because you may simply write on the screen. You do not have to sift through catalogs of function symbols to find the one you want, nor do you have to arrange your calculations like a Lego house. You simply write your equation as you would on a piece of paper and it converts it into a digital equation that it then solves.

In essence, this app may be used by any user or any age because its complexity is controlled by user input. What you write is as complex as it gets, meaning you can use it through more of your education. It even understands messy handwriting most of the time. The only two downsides are that it does not have as many functions as the iOS version and that it does not recognize variables.