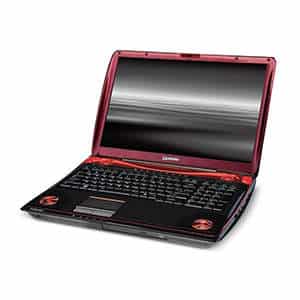 Toshiba is well-known for producing quality consumer electronics, from televisions to laptops.  Their latest release is no exception.  Weighing in at 9.04 pounds, you probably won’t be carrying Toshiba’s brand new flagship gaming laptop around with you too often. However, for those who like to game on the go, the new X305 gaming notebook is a definite consideration.

This is the first Qosmio X305 notebook release.  It is also the first notebook computer to use three NVIDIA GPUs in a tri-SLI configuration. The Toshiba X305-Q708 and X305-Q706 utilize the ultra-modern NVIDIA 9400M integrated GPU and a pair of separate NVIDIA 9800M GTS cards in the SLI. The three GPU setup provides customers the performance needed to run the hottest video games on the market on the highest settings possible, rivaling even most desktop PCs.

Using Turbo cache technology, both of the 9800 GTS video cards offer 512MB of GDDR3 RAM and up to 1663MB of shared graphics memory. The system is fueled by a 3200 mAh lithium ion battery.

Both laptops are immediately available for direct purchase from Toshiba.