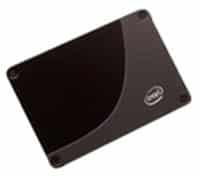 Intel has made a big splash into the SSD market.  Today the company officially announced the X25-E Extreme SATA SSD.  The drive boasts up to 250MB/sustained read, 170MB/s sustained write, 35,000 IOPS read, and 3,300 IOPS write performance.  A mainstream model has also been announced with lower write speeds.  The SSD also offers a <1ms random access time.  This new drive is the fastest SSD currently on the market.  With a max 80GB capacity, the SSD also offers a good capacity range for SSDs.  As with most solid state drives, pricing will be high at launch.  The price for the 32GB model will be $695 in quantities of 1,000.