The technology industry and enthusiasts alike are buzzing about the soon-to-be-released Core i7 CPUs from Intel.  Discussions are abundant for questions like “should I upgrade my computer?”  After all, the Intel Core i7 processors promise unparalleled efficiency and performance.

Mostly, enthusiasts are dying to find out how well their applications and benchmarks run on this next generation technology. Having a new generation CPU also means that other parts of the computer (i.e. the motherboard and RAM) also have to be upgraded.  Already, motherboard and memory manufacturers have announced X58 motherboard and triple channel DDR3 memory kits that are compatible with Intel Core i7 processors.

Fortunately, enthusiasts do not have to speculate any longer. Intel has sent pre-release samples of the entire Core i7 systems to respected technology websites for review. State of the art applications are used to run tests on the performance of a Core i7 system. The results are rather exciting, as you will soon see. 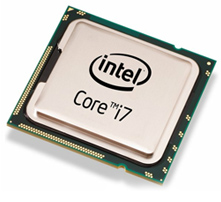 The code name for the Intel Core i7 is Nehalem. The primary goal of the Nehalem technology is scalability. Intel engineers have taken great pains to design the Intel Core i7 processors for scalability and ensure that the processors dynamically manage many of the core functions, such as cache, threads, and interfaces. In other words, you can expect to see different versions of the Core i7 processor for different types of computers. For example, there will be one version for laptops, a version for servers, another for personal desktops, and so on. This is done to enable various price points, performance, etc. for the needs of different users and requirements, and facilitate the utilization of processing power most efficiently.

The Nehalem micro architecture includes many prominent features that will enhance performance. The entire architecture dynamically manages cores, threads, interfaces, and power. The new architecture also allows running two threads simultaneously per core. That means a quad-core processor is capable of running up to eight threads simultaneously. New extensions are applied to Intel Streaming SMID that focus on improving string, XML, and text processing. The architecture also boasts a superior shared L3 cache. The high-end design delivers up to two or three times more peak bandwidth, and up to four times realized bandwidth when compared with Core 2 or Intel Xeon processors.

The Intel Core i7 will debut in three editions: Core i7-965, Core i7-940, and Core i7-920. The clock speeds, in GHz, are 3.20, 2.93, and 2.66 respectively. All three editions have 8MB of cache each. All three processors have recorded idle temperatures of around the 40 degrees range (Celsius), and load temperatures going into the 50-60 degrees range (depending on the configuration) at stock speeds and cooling. All of the processor models use Intel’s Quickpath Interconnect technology, which means that motherboards have to be upgraded along with the processors. 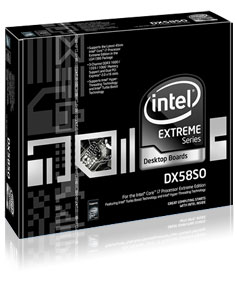 Bottle necks slow down performance. This happens when the processor, or one of its core, is unable to fetch data or instructions fast enough. The memory of the computer system is particularly important because of the amount of data that is passed through it as the system receives instructions from the applications. Theoretically speaking, this means that the faster a processor receives data from memory, the better the performance.

Traditionally, processors have been connected to the memory of a computer via an external bi-directional front-side bus (FSB). This bus served as the central connection point between the processors, the chipset that contains the memory controller hub, and all the other buses such as PCI, AGP, etc.

Intel engineers know that having more powerful processors means that the architecture must also be upgraded to ensure that data flows more quickly between all the different components, and thus the Quickpath Interconnect was created.

The most notable element of the Quickpath architecture is that the memory controller is now integrated into each microprocessor. Each processor has a dedicated memory controller. In the event that a processor needs to access data from the dedicated memory of another core, it can do so through a high speed connection. This allows the cores to get data from memory controllers directly, and connection with other components of the system is also greatly enhanced. The technology is named Quickpath Interconnect because that is precisely what it offers: high speed connection between all the components.

For this reason, the Core i7 processors can only be used on motherboards that support Quickpath Interconnect. The Intel DX58SO is one such example.

The Intel DX58SO motherboard (codename “Smackover”) consists of the Intel X58 Express chipset with ICH10R south bridge chip. The ICH offers support for all the other devices such as video and audio. All buses and components operate on a 133.33 MHz base clock. In other words, a multiplier is applied to the base clock to acquire a speed value. There are four multipliers on the motherboard that affects the overall system speed. They are the CPU speed, the memory speed, the Quickpath Interconnect (QPI) speed, and the uncore speed. The first three are dedicated to overclocking.  Uncore speed is the multiplier that is applied to devices that do not draw power from the processor. Together, these four multipliers manage the overall system performance. 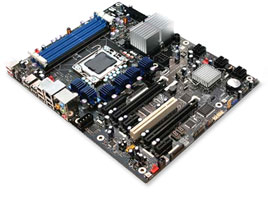 Besides support for the Core i7 processors (it supports all three editions), the DX58SO also offers other features, including integrated Intel audio, improved graphics performance, and the PCI Express 2.0 interface that delivers up to 16GB/s bandwidth per port.

As all data and applications are stored on a systems hard drive, it is of utmost importance that the system is able to draw data from the drives very quickly. This is achieved through six SATA ports with transfer speeds of up to 3GB/s. For external storage devices, eSATA is available to help achieve the same performance.

With the DX58SO motherboard, Intel actually emphasizes system stability significantly. For example, the motherboard features an exclusive fault tolerant BIOS that virtually eliminates downtime due to a corrupted BIOS.

The new features certainly promise highly enhanced performance. However, how does the Core i7 perform under stringent hardware tests?

Testing has been performed on four separate systems. The first three systems are the three editions of Core i7 processors. They are mounted on the DX58SO motherboard. The last system is the Intel X3350 processor (overclocked to 3.2 GHz), mounted on an ASUS P5E3 motherboard.

All 4 systems were put through a series of benchmarking tests using leading diagnostic/testing applications such as 3DMark system test, SANDRA 2009 system test, Everest Ultimate system test, POV Ray, SuperPi, WinRAR, Crysis, and World in Conflict tests. The results from so many tests reveal almost everything that enthusiasts would want to know about how the Core processors fare when compared to the X3350 overclocked processor. Performance values are obtained for CPU, memory, and storage system tests, single and quad-core rendering tests, and graphics performance tests (DirectX).

The 3DMark scores are usually used by gamers to gauge how efficient a system performs when running a 3D game. There are two scores – one for the GPU (Graphics Processing Unit) and one for the CPU. The GPU scores showed very little differences, as the graphics card used on all systems is the same. As the graphics processing was offloaded to the GPU while the tests were ran, the results are rather predictable. However, the CPU reflects slight differences that fall between the range of 5% to 10%, with the highest end Core i7 processor having the highest score.

The SuperPi scores are used by overclockers and enthusiasts all over the world to benchmark and test the stability of an overclocked system. The assumption is that if a system can successfully compute PI values for up to the 32 millionth decimal place without error, it is moderately stable in terms of RAM and CPU. Tests done on 1M, 2M, and 4M calculations all show that the highest end Core i7 processor produces the best performance. The X3350 processor loses out to the Core i7 920 by a small margin.

Whether you are a hardcore 3D gamer, a professional graphics artist, or an overclocker, the information will help you make better buying decisions. After all, the additional power from the Core i7 processors is meant to provide significant value for the consumer.

3D applications, audio, and video software definitely perform much better on Core i7 based systems. The new architecture is also more stable compared to traditional configurations. Traditionally, graphics and video editing is very time-intensive as the system must process a great deal of data from activities such as panning, zooming, and adding special effects.  With higher performance hardware, the editing process can proceed more smoothly and requires less time. The latest edition of the immensely popular image and video software suite, Adobe CS4 from software giant Adobe Systems, has already announced that their software is now compatible with the latest Core i7 based systems.  Pegasys Inc.’s TMPGEnc also utilizes the threading capabilities of the processor very well.

Ultimately, the buying decision depends on one’s personal needs and preferences. The suggested retail price for Core i7 processors is as follows: $999.00 for Core i7-965, $562.00 for Core i7-940, and $299.00 for Core i7-920. For professionals and gamers who run a lot of resource intensive applications, the higher end models will be highly desirable. For typical consumers looking to upgrade for improved performance, anything better than the Core i7-920 may be overkill.