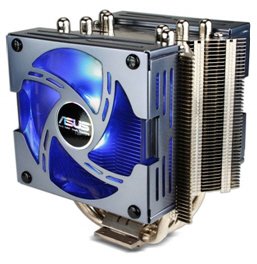 ASUS has released its first CPU cooler for the soon to be released Intel Core i7 platform. The ASUS Triton 81 offers a 90mm fan that functions between 800 RPM and 2,500 RPM, with a noise level of 18 dBA during normal operation.  The cooler is controlled by the motherboard’s PWM, and presents a blue glows when running.  ASUS’s Triton 81 is constructed of copper, and includes copper heatpipes that link its base with the fins.  The unit weighs 24.16oz, and supports Intel (sockets 1366 and 775) and AMD (sockets 939/940/1207/AM2/AM2+) motherboards.  Pricing and availability information has not yet been announced.